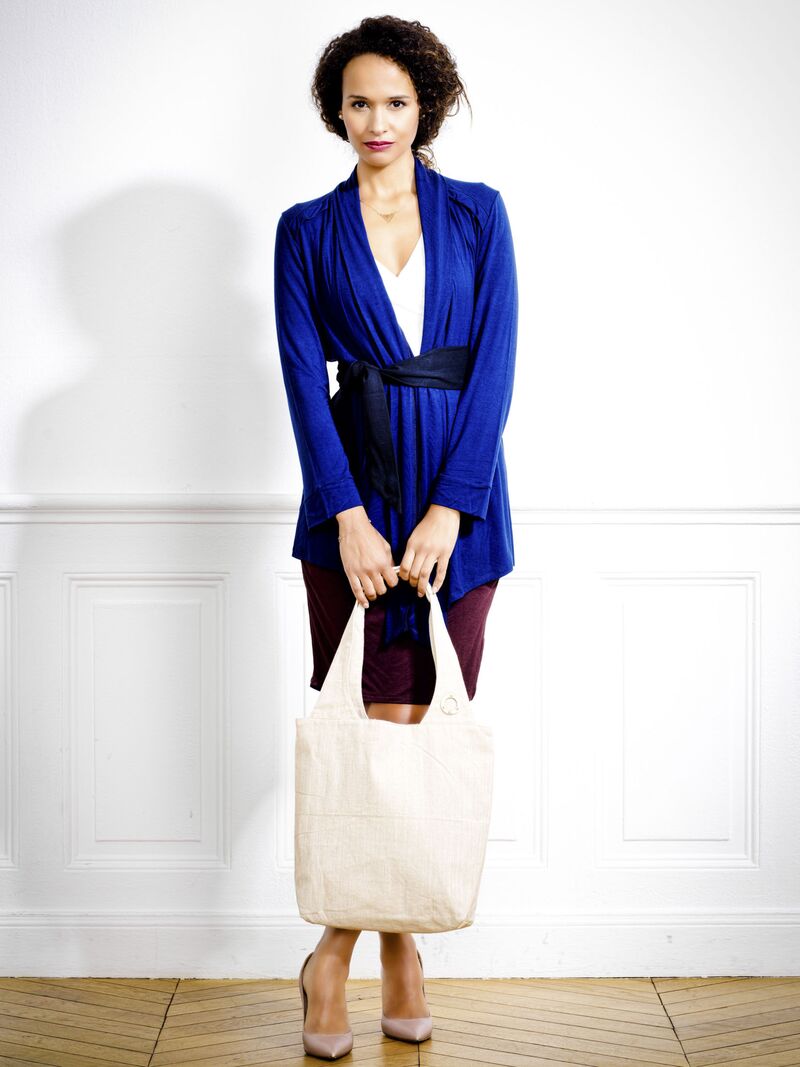 Women’s Workwear a Woman Would Actually Want to Wear

Four upstart entrepreneurs are changing how women get dressed for the office.
By Rebecca Greenfield

Sali Christeson and Eleanor Turner went on a two-day shopping reconnaissance mission in 2014. Hunting for women’s workwear, they hit up a handful of ­business-casual retailers all along the price spectrum, from Banana to Barneys. “It was a mess, basically,” Christeson says. The bulk of the clothing they found wouldn’t fly in most offices—hemlines were too short, fabrics wrinkled too easily, and quality was too low in general. The only professional outfits the salespeople managed to dig up were drab suits.

But the trip was a successful bust. The lackluster options convinced Christeson and Turner they had a viable startup idea: a company dedicated solely to workwear a woman would actually want to wear. Women make up more than half of the management occupation workforce, according to the U.S. Bureau of Labor Statistics, and almost half of the total labor force. And yet, at many retailers, they’re an afterthought. “You tell them you need work apparel, and they don’t ask you what you do. The clothing ages you,” Turner says. “It’s just fundamentally wrong.” For many women, shopping for office outfits is a chore and spending money on a pair of uninspiring slacks feels like a waste of hard-earned funds.

In summer 2016, Christeson and Turner, both now 31, started Argent, an online retailer of pants, blouses, blazers, and jumpsuits. Argent is part of a crop of startups reinvent­ing business casual for the modern female office worker. MM.LaFleur, another online retailer, calls itself a “wardrobe solution for professional women.” Senza Tempo caters to the urban executive, selling high-quality “workhorse” pieces that come in classic, office-appropriate silhouettes. Les Lunes makes workwear comfortable enough to spend all day in.

Talk to any of these startups’ CEOs and they’ll mention the paltry offerings at former business-casual stalwarts such as J.Crew and Ann Taylor. “I thought the options were pretty abysmal,” says Sarah LaFleur, the 33-year-old founder of MM.LaFleur. “Nobody was speaking to this woman, even the contemporary brands that most people think of when they think workwear.”

Over the past few years, traditional womenswear brands have shifted their energies to athleisure, hoping to lure customers back from the sportswear labels that ran off with their sales. “Most of the market share loss is due to the athleisure trend and fast fashion,” says Bridget Weishaar, a senior equity analyst at Morningstar Inc. In 2016, Lululemon Athletica Inc. saw 5 percent sales growth, while sales at the Gap fell 3 percent. As Gap and the like try to play catch-up by introducing athleisure brands, slashing prices, and forgoing quality, workwear has taken a back seat. “An environment like that creates a place where you can have these niche players,” Weishaar says.

This new group of startups is for women who want to look both professional and fashionable but don’t have the time or patience to hunt down the perfect blazer, if it even exists. In other words, for people like me. Admittedly, I work in a more casual field—I wear jeans to work more often than not. But as I’ve progressed in my career, I’ve realized the benefits of a more polished office wardrobe: It feels good to look good. Many studies have shown that what we wear at work affects the way we think and perform. Research from 2014 found that in a mock real estate negotiation, men in suits negotiated for more profit than those wearing sweatpants and flip-flops.

One big appeal of these retailers is convenience. They’re all online, but MM.LaFleur also offers a “bento box” service that curates a selection of items based on an online questionnaire. Anything the shopper doesn’t like, she can return for free. Argent also offers in-­person styling appointments in New York, San Francisco, and Washington.

My MM.LaFleur bento box came with one item I’d consider wearing, the Sant Ambroeus Jardigan ($195), a black structured rayon blend jacket that’s a much-needed update to my shabby, years-old Zara cardigan. The Estuko ($195), a rust-colored dress with three-quarter-length sleeves, felt too conservative for a millennial working in media. Everything came in stretchy, ­wrinkle-free performance fabrics. Comfort is a priority for the company, which tests its designs for at least a week before going into production. The fabrics wear well and aren’t suffocating, but they also make the clothing look less polished.

Senza Tempo’s clothing also promises wearability, but in silks and wools that might be better for the workplace. Founder Kristen Fanarakis, 40, who spent more than a decade in finance, tests the clothing herself. “I lift my arms like I’m hailing a cab,” she says. “I really live in them to see if they function.” Silk linings, she says, make her skirts and dresses more breathable in warm summer months. Yet the designs’ dressiness can veer into formality: The Diana A-line skirt ($450) felt more appropriate for my cousin’s bat mitzvah than a conference room.

Argent is going for a trendier set—the models on its website sport wire-rimmed glasses and bold lips. The company sells a polyester jumpsuit ($298) that’s machine washable and doesn’t require a complete disrobing in the bathroom—a huge draw. (Nobody wants to get naked to pee, especially at the office.) Its blazers come in colors other than the tired black and gray, like Pepto-Bismol pink and hunter green. They also have hidden pockets for iPhones, credit cards, and tampons.

Because these companies use a direct-to-consumer model, à la Warby Parker, they can deliver higher-quality fabrics for lower prices than upscale brands. “It’s made for people who are working all day, who need beautiful clothing that isn’t some exorbitant price tag,” says Morgan Gress, an MM.LaFleur devotee who works in marketing in Washington. “You’re getting the quality that you’re paying for.” (For those used to spending $100 on a Banana Republic dress, the prices will feel steep.)

Jennifer Spinosi, a 34-year-old attorney in Ohio, who owns multiple items from MM.LaFleur, says she likes the brand for several reasons: “I fell in love not only with their clothes but with the company itself and the way it speaks to and with customers.” MM.LaFleur uses its blog, the—M—Dash, to profile high achievers such as Dr. Roshini Rajapaksa, a gastroenterologist who co-founded a probiotic skin-care company. “I wanted to create a space where we celebrated professional women,” LaFleur says. (The company says it’s on track to make $70 million this year.)

That spirit of female empowerment is universal among the startups. San Francisco-based Argent hosts networking events featuring female C-suite executives from Dropbox, Twitter, Cisco, and Facebook. Les Lunes hosts the Badass Women’s Club, a group of Bay Area professional women who meet biweekly to talk about their careers. “Women face a sartorial double bind: too original or forgettable, too feminine or not enough, too uptight or casual,” reads Argent’s website. “It’s time to change the ­conversation—and your clothes.”

Of course, a fashion company that’s trying to profit from this sexist conundrum isn’t going to solve it. But I did like the jumpsuit.